Sometimes at the end of a sporting event (especially if it’s a close one) I have to look away. Because the look of pain, agony, and defeat from the losers makes my heart break. Especially if it’s a big, big deal….i.e. Olympics, Super Bowl, College Championships, NCAA , etc.

Or even the look on the face at a 5 year olds soccer game. All of it can be too much for me.

*Note – even if you don’t really get into sports – keep reading.*

Insert the Minnesota Miracle from Sunday January 14th. In case you missed it (or it doesn’t make it onto your radar) the Minnesota Vikings were playing the New Orleans Saints in a play off game (only one more game would be between them and the Super Bowl if they won). Note – the Super Bowl is here in Minneapolis so that would make it so much more incredible if the Vikings made it.

We were ahead of the New Orleans Saints for the whole first half, the lead started to slip away, and we found ourselves behind with 10 seconds left in the game and just like in the movies –  a pass was thrown, the defenders faded away, and the Vikings ran it in for a touchdown to win the game as the buzzer was going off.

WATCH IT HERE IF YOU DIDN’T SEE IT.

This happened 2 seconds after I said “OH NO – THEY ARE GOING TO LOSE BY A POINT – I CAN NOT TAKE IT.” and all of my emotions and sadness for the losing team (US) started to kick in.

It was an actual miracle.

The Minnesota Vikings have had their history of hard losses and we don’t have to go over those in detail here but after living here for 12 years I have learned from the die hard life long fans that it has been a long, hard road.

If you’d like to see that moment set to the music of Titanic – you must WATCH HERE. 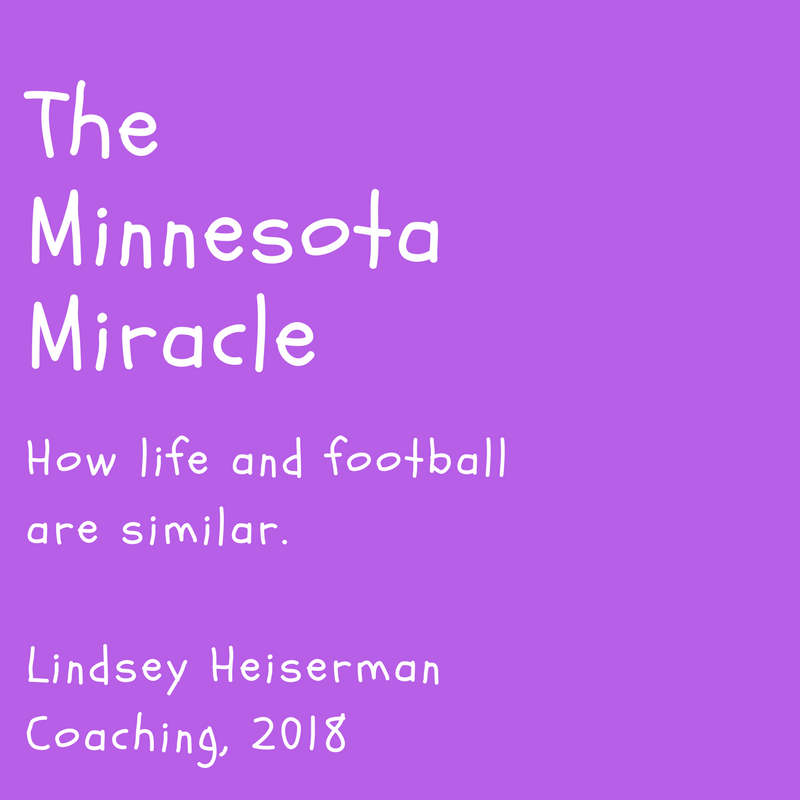 I danced around the house shaking my head saying over and over – I can’t believe it. And if you want to go down the rabbit hole of videos – google peoples reactions and watch how excited people were.

But what struck me was watching the interviews with the players after the game. Multiple players including the quarterback who threw the pass and the guy who ran it in for the win – they both said – “We believed in our team and we were going to fight until the very end. I had full confidence in every guy on this team to make it happen.”

They put their hearts on the line until the buzzer went off (and didn’t give up a moment sooner). That’s the lesson I want us all to take away from the Minnesota Miracle.

Life really does parallel this game.

You train. You prepare. You put your heart and soul into it.

You pull ahead of your opponent (life) and start to feel confident.

A few mistakes creep in (some very costly) but you stay confident in your ability and the ability of those who you surround yourself with (family, friends, co-workers, neighbors).

You stay focused on your goal and you’re able to look at your teammates and know that they are there for you and pushing you to your best.

You come close again but the opponent scores and you start to wonder if it will happen as you look at the time on the clock go down.

But you never give up and you throw that pass and it is run down the field as the buzzer goes off for a game winner.

Keep your belief high, your confidence growing, and never ever give up before the final buzzer.

As a final note – thank you from the bottom of my heart for all of your donations for my friend Corey’s rebuild. He lost everything he owned and also his beloved dog in a house fire last week.

Together we have raised over $400 and also a handful of gift cards. I am still taking gift card donations – EMAIL ME and we can set up a time for you to bring them to the gym or you can donate directly to his Go Fund Me Page.

If you’re ready to take a huge leap in your life and want to chat about it – schedule a free chat with me HERE and let’s make it happen this year.