One of my fondest memories of my career as a personal trainer was the charity work out I hosted on a New Year’s Eve day years ago. It was to benefit the sister of one of my clients who had been diagnosed with a brain tumor (and it would eventually be fatal). I had been doing monthly charity work outs for years but nothing compares to raising money for someone you know personally.

We raised over $1,200 in that work out and it had energy, tears, happiness, sadness, and it was truly a moment I will never forget. Being able to use my talents and skills as a trainer and the ability to bring people together to raise money for someone I know personally, is the absolute best.

So when a friend asked me if I could raise money for someone in her life, I immediately said YES.

Here is some background:

In October 2018, Shawn received a devastating diagnosis. After a few weeks of uncontrollable muscle spasms in his left arm, he was diagnosed with Amyotrophic Lateral Sclerosis (ALS), also known as Lou Gehrig’s Disease.  ALS is a horrible disease, robbing its victims of the ability to walk, dress themselves, talk, swallow, and ultimately breathe. ALS has no cure and no effective treatment. The average lifespan from diagnosis is three to five years.

Shawn is approaching this new challenge the same way he has tackled everything he’s come up against – head on with strength, determination, and a wonderful, positive attitude. He is more concerned about the effect of his illness on his family, friends, and coworkers than he is about himself. He is determined to make every day special just like he always has. For those that know Shawn well, he does that by just being himself.

Shawn is the father of 5 children  ranging in ages from 24 to 9. He’s the grandfather of 4 grandchildren ages 1 to 4. A former Marine (I know, once a Marine, always a Marine), Shawn proudly gave 4 years of his life in service to his country. During his time in the Marine Corp, Shawn served during Operation Desert Storm and spent time in Okinawa, Japan. 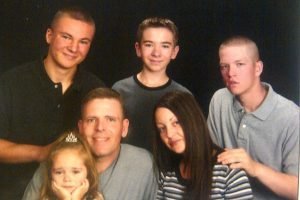 There are going to be many ways for you to get involved (or simply donate).

Donate Directly to the Go Fund Me Page

You can find that link HERE.

Sponsor me for the Sandlot Half Marathon

On Saturday March 16th I will be participating in the Sandlot half marathon – a unique and fun race put on by a group of Minnesotans who love running. You can read more about the race HERE. It is 192 times around the bases for a half marathon. I am using this race as a fundraising opportunity. You can PLEDGE an amount per lap and sponsor your donation that way OR make a flat donation. To donate, please coordinate with me via email lindsey.heiserman@gmail.com. All these donations will be given directly to Shawn.

I will be hosting a group work out to raise money. It will be on Sunday March 17th at 9:30 AM held at Relative Strength in Golden Valley. All are welcome, bring friends, family, neighbors. The work out is for all levels of abilities and can be modified up or down. It is $20 CASH only. Again, all donations will be given directly to Shawn and his family.

I hope you will join me in making a difference in the life of Shawn Carvin and his family.