Confession: I barely finished my winter running challenge (one day to spare).

Accountability can be the best ….. and the worst. I have noticed the last couple of years that once we complete World’s Toughest Mudder in November, it often becomes hard to get back into a training routine. Especially because then it’s Thanksgiving, then Christmas, then New Year’s, then birthday, then winter and then OOPPSS – somehow it becomes March or even April and we haven’t even really started running again yet.

Some would say – no big deal – it’s winter and hard to run outside and who really wants to run on a treadmill? That’s true. It does make it challenging. But I still don’t like the end result – making excuses for 4-5 months about why we can’t run.

So this year we ran across this virtual running challenge. You pay $25 (which goes to charity – win!) and then you run and check into the Facebook group whenever you want and at the end you get a medal. I was a a little skeptical of whether or not this accountability would work because I don’t really want another medal and it’s just virtual. 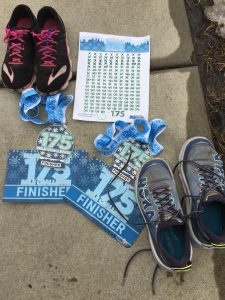 It started in mid-December and ended on March 19th – the goal – 175 miles in 100 days. That’s only an average of less than 2 miles per day. So we figured if you run more on some days it would all even out.

Throughout the months the “pressure” of doing this challenge hung in the back of my mind. Every day we didn’t run it was a little bit of added stress. The times we accidentally overslept and missed a morning run. All of these turned into a month of crunch time putting in sometimes 2 runs a day. And putting in longer runs than we had done since Worlds.

Along the way I kept asking myself “Why does this matter? I don’t really care about the medal, no one will know or care if we finish so why are we stressing out about getting all these miles in?”

BECAUSE I CARE. I CARE ABOUT KEEPING THE PROMISES I MADE TO MYSELF.

Let me ask you this. How many times have you….

And then after awhile do you just get so sick of your own crap? and excuses?

The reason we get so tripped up is because we forget that what we’re actually aiming for is the feeling we get behind the goal. It really didn’t matter to me if I had the medal from the challenge but what did matter what knowing I kept a promise to myself and the feeling of being more fit and having put in more miles before the spring running season came. Did I do it perfectly? No. I pretty much avoided the accountability until it was crunch time.

But it made me think about so many other things in my life. Why do I stray from the way of eating that feels good to me? Why can’t I organize and clean my house? Why do I sit and scroll on my phone instead of doing those small things on my to-do list?

We get impatient and deep down we don’t always want to go through the process. The nitty gritty. Putting in the work. We know it’s there but us as humans are so good at making excuses and reasons why and putting off until tomorrow. It was never about finishing 175 miles -it was about putting in the work day by day and mile by mile.

Accomplishing goals and keeping promises to yourself need a few things to be successful and keep you pushing through the process.

I want to know – in what part of your life are you sick of your crap? I’m here to help be your accountability buddy – – EMAIL ME. I have plenty more stories of areas of my life where I’m pretty sick of my crap and excuses. I’d love to hear yours. Let’s kick our excuses to the curb.