Confession: I sometimes forget there’s a whole big world out there and a LOT of stuff happens that really matters.

A few weeks ago I had lunch and spent some time with an old friend Jamie. Jamie was a member in my team fitness class years ago and we became friends. About 3 years ago, she told me she had decided to join the Peace Corps. Amazing. She left for Fiji and spent over 2 years serving the country and the people. She just returned to the states and something tragic and terrible happened in Fiji.

Imagine leaving the place you had spent the last 2 + years of your life, your heart, your hard work, the people you met, and the home you had created.

And then a Category 5 Cyclone hits the island.

The story below is from Jamie and I hope you will take the time to read it. Our charity work out this weekend (Sunday March 13th at Noon) will be used to raise funds for Fiji. You can donate ahead of time if you’d like at the Friends of Fiji Website. The money we raise at the work out will be sent directly to Jamie’s friend Julie who is on the ground doing work as we speak. (Read about her in the story below). We will return to our new format in April, but I will always take time for a personal request.From Jamie:

I don’t actually know where to begin. On February 20, 2016 Cyclone Winston set its evil eye on the Fijian Islands. A Category 5 storm, now known to be the second strongest winds ever to be recorded during a Cyclone. Interesting point a Cyclone, a Typhoon and a Hurricane are all the same thing. The label only indicates its location in the world. Second strongest winds ever, and strongest in the southern hemisphere.

Fiji is a small island nation nearby to New Zealand and consists of 332 islands and 900,000 amazing people. This storm was unique in many ways. Aside from its strength, it came from the opposite direction as most storms in the Southern Hemisphere, and intensified as it approached, and shifted direction very quickly leaving most people very off-guard. It would be like saying the US Weather Service saying a storm is going to hit Florida in on a Wednesday, going to sleep on Sunday and people in the Carolinas waking up on Monday in the middle of a hurricane.

The eye bounced around Fiji. Where it struck, reports are that it appears to have been bombed, and then burned. This was not a storm that could have been prepared for. Cyclone proof building were destroyed, cinderblock schools crumbled, evacuation centers with roofs ripped of like paper.

From the Fiji Times: “By Friday last week, the stats revealed that 350,000 people were affected by the cyclone and250,000 people were in need of water, sanitation and hygiene assistance. 60,000 primary and secondary level students were affected and 24,000 houses were damaged or destroyed. 167 of our 300 islands were in the affected zone and damage to agriculture was estimated at around $US60million with up to 100 per cent of crops damaged in some areas.”

Since there are so many islands affected, even the most rapid and generous responses of aid can’t reach that many people and places at once. One island near and dear to me is the island of Taveuni. It is called the Garden Island. The villages on the top and the bottom were flattened. Cyclone Winston also took out both of the jetties, leaving Taveuni virtually inaccessible. It took two weeks before they were operational again. That may seem like a very quick response, and it was. Now imaging being without food (all crops were ripped out of the ground and rotting), without drinking water and without your roof or walls for two weeks.

My friend Julie Kelly is an American resort and dive shop owner in Taveuni. They immediately took it upon themselves to so whatever it was that they could do. They had some friends send them money via Western Union, took it to the supermarket, loaded up their trucks and drove to those villages. A week after the storm, Julie and her team were the FIRST PEOPLE these villagers had seen since the storm.

There are many funds set up. I know first hand where the money sent to Julie will go. She posts receipts and pictures everyday of their work. It is an immediate response.

The people of Fiji are hurting. However, in these times they will continue to praise God, be thankful for what they have and be ever so grateful for any help they are given. They are not sitting and waiting for assistance. They are picking up the pieces and rebuilding what they can from what they have and do it smiling. Hard work and a positive attitude do only get you so far. We can help go further.

Thank you for taking the time to read Jamie’s story. It’s moments like this that put my life in perspective, make me so incredibly grateful for my house, my safety, and everything I have.  Let’s join together and send our love to Fiji. 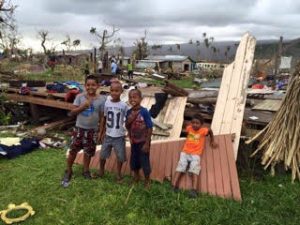 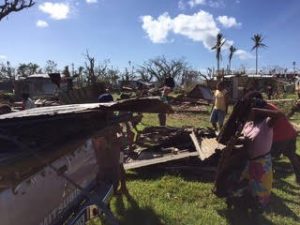 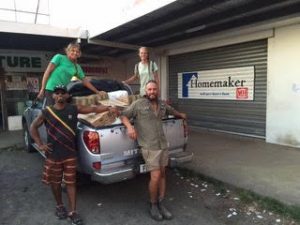 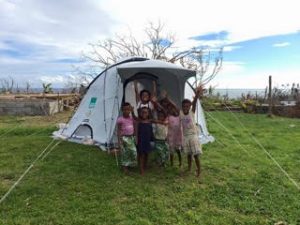 Charity Work Out will be Sunday March 13th at NOON. Don’t forget to spring your clocks ahead!!