Confession: I got in a small fender bender the other day.

Note – I’m fine, my car Eleanor is fine and the other guy is fine. His car may need a little repair.

I pulled up to a red light waiting to turn right. I braked, I inched forward to look left again before turning, I started to go, braked again to look for incoming traffic and then BOOM.

Once I realized I had been hit from behind, I turned the corner and pulled over. I took a big deep breath before getting out of the car.

The other guy got out and we both inspected our cars. Mine did not even have a scrape and his had a huge crack in his bumper. But what was striking about the conversation is he kept saying over and over again “YOU MADE ME BRAKE.”

And I kept saying “It was a red light.”

What I believe he was trying to say was “because you started to go, I went and then you stopped so I had to brake again.”

And he has a point – I started to go and then stopped again but the bottom line was – it was a red light and he should have been stopping even if I had gone. He had intentions of just cruising through the light (red light).

After we parted ways it got me thinking. How often do we intentionally or unintentionally try to pass blame onto others?

I know I do it all the time. It’s easier to have someone else take the blame for our actions.

He wanted to blame me for “making him brake.” When you read that sentence out loud you probably laugh a little. It seems silly when you think about it. There is nothing I did that MADE him brake.

HMMMMMMMMMM. Me too. It’s so much easier in the moment to just blame someone else or shift responsibility to another party.

“The difficulty we have in taking responsibility for our behavior lies in the desire to avoid the pain of the consequences of that behavior.” ~ Scott Peck

Imagine if the guy had said….

“I’m sorry that I did not stop soon enough and wasn’t paying attention.”

“You made me brake.”

I challenge you to think about the areas of your life in which you are shifting blame or responsibility to someone or something else.

Yes all of these things (kids, significant other, boss, time, money) have an influence on our life. However, at the heart of every interaction, we have the choice to accept responsibility for how we react, how we speak, what we do and ultimately how we show up in the world.

We also have to realize that our actions which include both responsibility and blame are the creators of our reality. 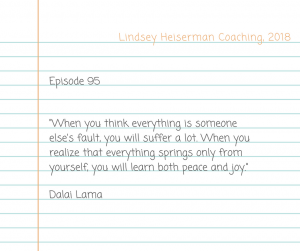 “When you think everything is someone else’s fault, you will suffer a lot. When you realize that everything springs only from yourself, you will learn both peace and joy.” ~ Dalai Lama

For me this is a life long journey of learning this responsibility – I invite you along the journey as well!