In this episode I sit down with Dr. Ashley Zapata, Dr. Erin Ayala, and Madilynn Garcia of Stamina Racing Collective to discuss the importance of diversifying cycling. The Stamina Racing Collective is a femme/trans/women cycling team based in Minneapolis, MN that is working to diversify the sport of cycling through mentorship, improved accessibility, and community development. The camaraderie and support they give each other is only the beginning of what makes their group so great.

– How each member got involved in the team

– Many people have specific safety reasons for quitting cycling

The team came about by chance . . . and design

“I let slip conveniently that I am interested in endurance cycling,” says Ashley. “And Erin like her antennas went up. Within I think a week was like, hey, so I have an idea for this team. Would you want to be a cofounding member? And immediately I was like, Yeah, of course. I’m down, put my name down. I don’t know what this entails. I don’t know how dramatically my life will shift. But I’m down. Let’s do it. And here we are. And I just no regrets whatsoever.”

The Importance of Gender Neutral Language

“Erin was so kind to inform that you all gender neutral language,” said Lindsey. “And I thought to myself, did I say ladies? Did I say guys, what did I say? So I went back. And sure enough I had said something along the lines of ‘excited to talk to you, ladies’. And I just love that she messaged me, it’s something I’m trying to work on. And I’m not trying I am working on.”

“But it is incredible how often it slips, and it is unconscious. And you don’t realize what you’re saying. I know it’s probably uncomfortable for one to send those to people. And you don’t know how other people will react. But let’s use that as sort of our launching point for the conversation about the mission of the stamina racing collective.”

The diversity of the cycling community is growing very slowly

“I realized pretty early on when I entered cycling, how little diversity there is and how many white cisgender men there are in the sport” says Erin. “And I think that really sets the tone for the environment and competitive cycling. And as a result, I think women, trans femme, non binary folks, people of color, and immigrants and queer folks are often unintentionally or intentionally placed on the sidelines or the margins are excluded. And that really is the purpose and the mission behind Stamina Racing Collective is to change that narrative.”

How They Make People Feel Welcomed In Their Community

“I know these things cost a lot of money. But here are some things that we can do to mitigate cost or challenges, barriers to accessing these materials. That feels welcoming, that tells me I belong in this space, too. And that’s huge.”

George Floyd spurred on a need to make actual change

“My piece of the puzzle was in the wake of the George Floyd murder,” said Erin. “We saw a lot of people in the cycling industry and in other corporations post the black squares on social media and, and calling for change and making promises and commitments on how they were gonna do better. And here we are six months later, and we can ask how much has really changed?” I wanted to be a part of the change, and I wanted to do it in a meaningful way.”

“I really just had kind of a wake up call where I said, ‘if I’m going to do it, then I need to do it well.’ And that means starting from the ground up, rather than just trying to change the system or the team I’m on altogether. I think my spouse knew that it was coming earlier than I even knew that I was going to do it because I often got comments like when are you going to just do your own thing. And so that was my piece of the puzzle is being like, okay, the time is now we’re just going to do it. And I’m terrified, and I don’t know how, and I’m going to do it anyway.”

“It said that over half of women who began biking as their main method of commute, quit in six months or less,” says Madilynn. “And the biggest reason that they stated was this feeling like they were lacking safety. And for women, femmes, trans women, safety means so many things, right? Our physical safety our emotional safety, it’s not just about cars, but about nefarious human beings about. So it’s big, but things that enhanced ridership were a sense of community, it was having lights that were brighter, right?”

“I personally have found that as soon as I bought bright lights, I was stoked to ride at night. Like the things that have made me feel safer on the bike have meant that I ride more. And I think about the impact that that could have for somebody who isn’t able to purchase $70 lights, right? Who doesn’t feel comfortable buying a rack and the bags so that they can commute two or three days out of the week? And is taking the bus in a pandemic instead. Right? And so really thinking, you know, what are the small the very tangible ways that we enhance ridership, but also what are the emotional and spiritual things that we can make space for that get people riding more.”

Stamina Racing Collective Has made it’s Own Structure

“I think one thing that is important to how we developed is we recognize that we don’t have to adopt the same structure and organization and the same framework that other teams use, because that’s based off of a lot of white men,” said Erin. “They’ve created a system and it works for a lot of people. It doesn’t have to work for us, like we can create a different system, and create that space for ourselves. And so rather than having one person making the decisions on who the sponsors are going to be, or picking the color scheme, or the the kit design, or you know, even the routes, or when we’re going to work out, or how often we want to work out, like we vote on all of it, and everyone has a voice.”

“I think that’s super important, because I think there can be a tendency to often unintentionally tokenize people of color, and saying things like ‘we’re a diverse team, like we have so and so’ and I’m always asking ‘what else are you doing, and how much of a voice does so and so have in decision making and power?’ And we wanted to really throw, that out and build from the ground up. And so that’s a really important piece of who we are.”

If you enjoyed this episode, leave a rating and review on Apple Podcasts and connect with us on Instagram too! 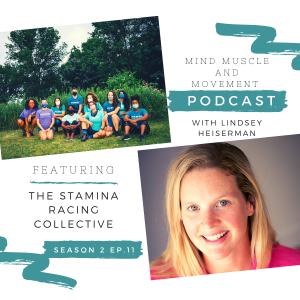