Success. Stayed out all night. Pride in 40 miles. 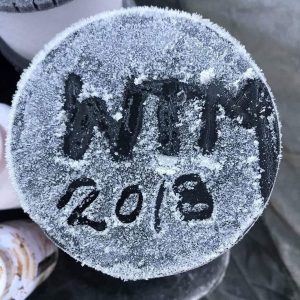 This year at World’s Toughest Mudder taught me all about turning “failure” into success, focusing on the positives of every situation and being proud of what I did accomplish.

If you’ve been following along for the past few years, I have completed 3 previous WTM events – and each year have completed 50 miles. This is a great accomplishment and something I am very proud of. So naturally – 50 was the goal going into this year.

The event moved from the lovely desert of Las Vegas to Atlanta. If you know anything about ATL – you know the weather could be 80 degrees and hot or 35 and cold. Mother nature sure had some interesting plans for us. It was 70 and sunny the Tuesday before the event, the temps dropped and it rained for days (including the day before the event during set up), and then the race had temps predicted to dip as low as 30 degrees with a frost warning.

Our goals remained the same as when we were in Las Vegas – stay out for the entire time and get 50 miles.

Everything about this race was different.

As we were deciding what to wear for the first lap – I knew it was going to be different in every single way.  I was putting on leggings, a warm compression top, a windjacket and a HAT. At 12pm I was dressed for what seemed like a winter run in Minnesota, not an obstacle race in HOTlanta. 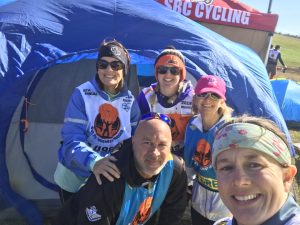 We are prepped and ready to go (in winter gear) with an amazing pit crew there to support us, feed us, and help us into wetsuits. 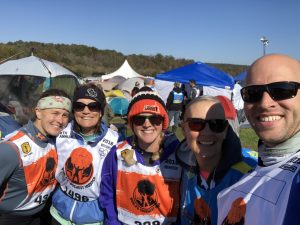 Let’s pause the story for a moment and talk about this photo. The two on the right are Buffie and Danny Dumas. You may remember in Episode 102 of the podcast I talked with Buffie and Dan (her husband). We randomly met Buffie and her son Danny on the Michigan course a couple years ago. After helping her up the wall – we all instantly became friends, we stayed at their house this last year and Danny decided to do his first Worlds event this year. It was super special to have them there. Make sure you go listen to Episode 102 – it’s an incredibly inspiring story. FIND IT HERE.

Back to the race. I was so nervous about the cold. Temps were predicted to get below freezing and I remember how cold I got in Vegas during the night. But I tried to block it out of my mind and just get started. The first  hour is run with no obstacles and then they all open on a rolling start. So the goal is to get as far as you possibly can before the obstacles open and get as many miles done and out of the way.

It was just like a Minnesota run – if you’re bundled up and moving – you can stay warm. So for the first hour we were warm and decided if we ran fast enough and the obstacles didn’t all open, maybe we could make 2 laps without a wetsuit.

Into the second lap (no wetsuit) BOOM – two water obstacles were open where you had to fully submerge your body. From then on – this is how I felt. 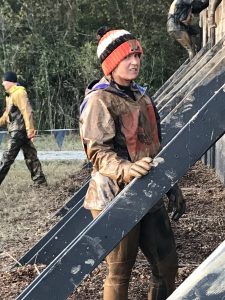 After that lap – around 3pm – the full wetsuits came on and we started back on the course. I believe it was shortly after we started this lap I found myself in tears. I knew from the minute this race started it would be 100% a mental game and have nothing to do with my body. I know I’m strong, I know I can last for 24 hours, and I know my body will carry me.

I had a big moment of doubt if my mental game could stay strong. It was 3pm, I was in a wetsuit (which is so heavy and exhausts you so much faster than running without) and I had 21 hours remaining.

I cried and got out my frustrations and continued on. We also play what we call the alphabet game to distract us and keep our minds active. We pick a category such as “food” and then everyone has to come up with a food that starts with each letter. A really cool thing happened (and the reason I’m telling you this story). We’re marching up a hill, playing the alphabet game and all of a sudden all these people appeared asking us what we were doing and they all joined in. Apparently they are many foods that start with “M.” The point is – you are never alone. This is true on that brutal course and in every day life.

The temperatures continued to drop, darkness settled in and shit got real. By the time midnight rolled around over 200 people had quit or been medically disqualified and the course was sparse. Many people decided to stay in their tent for the night and possibly emerge in the morning. Not us. We knew that if we stopped – it was over. 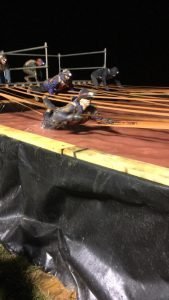 That night from about 10pm-7am is a blur. Temperatures did drop below 30 degrees, ice covered most of the obstacles (a few even shut down for hours), there was a beautiful layer of frost over the grass and only a few competitors were on the course.

Here’s the truth – no matter what happens in life – it all comes down to putting one foot in front of the other. If you do that – you will make progress. And we are all capable of so much more than we ever thought both physically and mentally.

The title of this blog was borrowed from Danny (our friend from above) who said life is a lot like lap 7 & 8. That couldn’t be more true. For me lap 7 finished around 7am which is actually the coldest part of the day just as the sun is starting to come up and I truly did not know if I could go back out. But I put one foot in front of the other. And I knew I would be so disappointed if I stopped just short of what I was capable of doing.

And so – we went back out. For lap 8. Just like when you think you can’t do anymore……..you have some microwave mac and cheese and you go back out there.

We did not make 50 miles. We did not come home with a brown bib. There was no finisher picture like this (last years photo). In fact – no one was around for the finish because it was so cold they had to go to the car to warm up. We did not meet our goal. 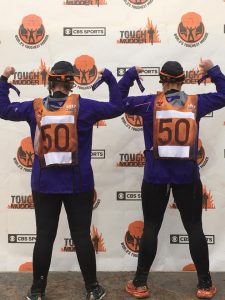 But did we fail? Was the event a total failure? NO WAY. I am so proud of our mental grit and grind to stay out there all night and 22 1/2 out of the 24 hours. The 40 miles we covered this year were harder and more taxing in all ways than any of the past events where we got 50. On paper did we fail? Sure. Didn’t meet that goal.

I personally had to dig so deep into my heart and soul to keep going. And ever since that day it has been a constant reminder that I can do challenging things. I can overcome obstacles -both the ones at the race and in life. I am actually stronger than I thought. All of this applies so much to life. The race was one 24 hour period in a 365 day year.

The real question will be – how deep can I dig and push now and in the future? 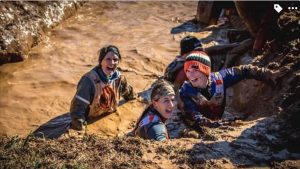 And as the best MC Sean Corvelle says “the race doesn’t’ end at the finish line – it ends somewhere out there and then you bring it on into the finish.”

Go out there and run your race.