We’re back for another season of the Mind Muscle Movement podcast and we’re kicking it off with Dr. Grant Norland to talk about growing your company with a mission!

He was our VERY first interview back in 2016 (listen to that here), and we are so happy to catch up with him again for our new season!

We talk about the progression of Dr.Grant’s physical therapy business from point A to point B, including the thought processes and daily efforts of his entrepreneurial work. Along with how he’s gotten to the level of training elite athletes including NFL players.

Listen to the full episode here:

An Entrepreneurial Mindset Mixed With Hard Work Is Key (1:31)

“I’ve always just been an entrepreneurial minded person. I was the type of guy that had a business for myself when I was in sixth grade. I started ‘Grant’s Lawn Care’ and I was going around the neighborhood mowing lawns. From there I’ve just always had that mindset of just doing things for myself.” said Dr.Grant. “I felt like, especially in the Physical Therapy realm, there was an opportunity, to practice the way that we like to do things.

That sometimes doesn’t jive with some other models of care, especially bigger corporate models, and so I saw that as an opportunity to put our spin on things and provide care the way that we see is the best in terms of physical therapy. That’s kind of how we started it out, and then it just kind of grew from there. We added in the sport performance side of it with the training. Now we’re just starting to grow the nutrition side of it, and we’re kind of creating a conglomerate of professionals that creates a holistic environment for people, especially athletes, to maximize their potential.”

“I’ve been fortunate.” said Dr.Grant regarding his staff, “Call it luck, call it fate, call it whatever it is, but most of the staff that we have has basically reached out to me, just cold. They sent me an email, and just said, “Hey, I’d like to explore working there,” and that’s how the process started. I didn’t even go searching for it, they just found us for one reason or another and reached out. It’s just been fortunate that we found the right people, and we’ve got an unbelievable team here now that works really well together.

I think that’s one of the biggest compliments I’ve gotten from people when they come in here and they observe how our staff works together as a team. They compliment how positive of an environment it is, how well people seem to work together and how they all seem to be enjoying doing what they do. Those are some of the biggest things, I think, that lead to long ­term success in a business. So we’re fired up about that.”

Networking and Connections Are Necessary When Starting A Business (6:23)

“We didn’t have a ton of connections up here, we didn’t have a family connection, we didn’t have a long background with anybody up here that would be referral sources for us or anything like that.” Dr.Grant said. “That was a challenge at first, but that is one of the things that’s tough for a lot of people, they think, Well, I got this great idea, if I just put my shingle out there, people are gonna show up, and that’s not quite how it works, unfortunately. So a lot of it, it’s just like you said, it’s putting your head down and just working. And when you’re not providing the service that makes you money, you’re out there networking with people or connecting with people that would be good referral sources for you. Or you’re going direct and coming up with ways to reach out directly to potential clients.

But for us, it was more of that networking side. I was spending a lot of time at Chamber of Commerce meetings, different networking events, or even just cold calling different golf pros. They ended up being great referral sources for us, ’cause we have a golf ­focused program that we do specifically for golfers and helping them improve their golf swing. So that became kind of a niche for us and making a lot of connections with those types of people was important.

Then just providing a really good service. The biggest thing for us has been word of mouth is providing a good service, and then having those people tell their friends or family about it, and that’s just kind of a spider web. That takes a lot of time. I heard this saying before, ‘If somebody has a bad experience they’ll tell 10 people, but if they have a good experience they’ll tell 2.’ Takes a little longer to get that good message out there, but eventually it does get out there.”

“Love him or hate him right now, I know he’s kind of a controversial person, but Bill Gates talked about the term “The 10 dark years.” He’s kind of famous for talking about that. Nobody’s going to know about you. You just have to put your head down and work for 10 years. Eventually you come out on the other side and people know about you, but it’s you just gotta put that work in.” said Dr. Grant.

“You mentioned people hanging it up early, and I think that’s a thing that happens a lot, just because you never know how close you are to success. It might be that next break that gets you to where you wanna be, and I think a lot of people stop before they get to that point. There’s obviously times where it’s just the logical thing to do if you don’t have a good business model, you’re out of money or whatever it is that you have to… but I think that perseverance piece is important.”

“There were definitely doubts, but I don’t think I ever got to the point where I said, ‘Yeah, we’re gonna hang it up and we’re gonna quit,’ because I think there’s always a way. If you’re smart about it and you think it through, I think there’s always a way through an obstacle.” said Dr. Grant. “And I think being adaptable is a huge part of that. No more important than the times we find ourselves in now.”

Benefits Of Cash Pay Only Versus Insurance (13:39)

“Well at times there were a few people that we definitely lost because of that, but that’s far outweighed by the benefits of what we’ve done and the way we’ve been able to treat people because of the model that we have. We’re not beholden to any insurance mandates or codes or anything like that. Which our sole purpose is to provide the best treatment we possibly can. There’s never a situation where we’re gonna go, ‘Well, we get reimbursed better for this particular treatment than the other one, so we’re gonna do this because we get paid more for it’ and that happens all the time. Nobody talks about that.”

How Healthcare And Payments Are Transforming (16:35)

“There’s a reason why things like Lazik eye care, 15 years ago, was $4500 to get one eye done. Now you can go in and it’s less than $1000 to get both, and it’s better. It’s faster and it’s cheaper. And that’s what everyone wants to do, but putting more layers in between you and the provider of the care does not accomplish any of those goals. If you want better, faster, cheaper, you gotta get the middle men out of the way and let the market sort itself out. Price transparency is huge with that.” said Dr. Grant.

“It started off with some referrals. I think there were people that were close to that kind of community that saw what we did and saw the benefit of what we could offer people. Another aspect we haven’t really talked about, is that I trained quarterbacks a lot. So we had a draw for that where we had some pretty high level quarterbacks come in and work with us, that then referred some of their teammates to us, and that sort of thing. That organically spread from there, and it’s another network thing where a lot of high level athletes have a little bit of a herd mentality.

They want to do what their buddies think are the best things to be doing in terms of training and getting better. So when the next latest greatest thing comes out, everybody has to have one. The craze now is the Theragun thing, like everybody’s got one of those now because it became the thing to have.” said Dr.Grant. “I think we provided people with a good service and they saw the results from it.

They saw that it was different from some of the other things that they’ve tried before. So then they share that with their teammates and other people that they know, and then it kind of spreads from there. Then they come check it out, and they see the difference too. Then they stay around typically, so it’s been really good for us.” 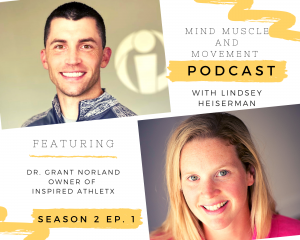 Grant Norland is the founder and CEO of Inspired Athletx.  He earned a Doctorate Degree in Physical Therapy from the University of Iowa and an undergraduate degree in Exercise Science from Truman State University (MO), where he also played quarterback on the football team.  Dr. Grant is a Certified Strength and Conditioning Specialist through the NSCA as well as a Certified Golf Fitness and Medical Professional through the Titleist Performance Institute.